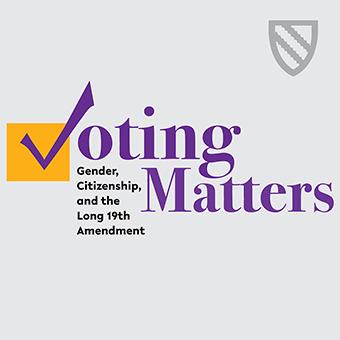 This roundtable conversation, featuring scholars who have pioneered innovative approaches to the past, present, and future of political empowerment, looks at the relationships among the Reconstruction Amendments, the 19th Amendment, the VRA, and the INA.

The passage of the Voting Rights Act (VRA) in 1965 marked one culmination of a long civil rights movement that began in the wake of the American Civil War and gathered steam in the early 20th century, long before the Montgomery bus boycotts and the emergent leadership of Martin Luther King Jr. inaugurated the best-known phase of the movement. Designed to restore the intention of the 15th Amendment, the VRA invalidated poll taxes, literacy tests, and other prerequisites and practices that had been used to disfranchise African American women and men in the states of the former Confederacy. The same year, the Hart-Celler Act, otherwise known as the Immigration and Nationality Act (INA), ended the racially discriminatory “national origins formula” that had governed United States immigration policy since the 1920s. Significant milestones in struggles for equal citizenship under the law, the VRA and INA also seeded further controversies over race, gender, and national belonging.

Welcome
Jane Kamensky, Jonathan Trumbull Professor of American History in the Faculty of Arts and Sciences and Pforzheimer Foundation Director of the Schlesinger Library on the History of Women in America at the Radcliffe Institute for Advanced Study, Harvard University

Moderator
Tomiko Brown-Nagin RI ’17, dean of the Radcliffe Institute for Advanced Study, Daniel P.S. Paul Professor of Constitutional Law at Harvard Law School, professor of history in the Faculty of Arts and Sciences, and chair of the Presidential Committee on Harvard and the Legacy of Slavery, Harvard University